In Liz we Truss. Oh No! Get Rishi Quick. 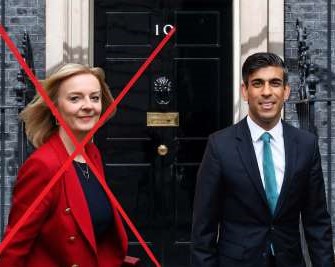 So a newly appointed prime minister made a mess of delivering a sweeping tax cutting budget; that seemingly was conceived without the consensus of her party, without proper cost analysis, at odds with the Bank of England and the IMF. It was promoted in a gutless manner and the optics of the higher rate tax cut didn’t look good either. The optics of tax are as important as their monetary consequences. Cigarettes and alcohol, for example, can be taxed with impunity as they qualify for an immorality/ disease causing uplift. The pressure of the situation proved too much, first she capitulated and completely reversed her policies, at the behest of a newly appointed chancellor, who had been cast as the steady hand to change the tune and pull the strings. It was impossible to recover from such a humiliation and the inevitable resignation was followed by the speedy appointment of her successor Rishi Sunak, who was met with the approval of the currency and the UK gilt markets. The reality is the UK has endured a period of stagnation. Despite inflation, there has been no rise in GDP per capita over the last 17 years, which is staggering. Off course there have been tumultuous upheavals in that period form the credit crunch, to Brexit to the Ukraine war, so a budget to stimulate economic growth, to lighten taxation and increase disposable income mightn’t be a bad idea, yet her proposals were met with shock and derision and caused widespread perturbations in the markets and a rapid decline in the value of the currency, as economist chided the notion of borrowing in the face of high national debt with risks of not only increasing debt but the interest rate at which this debt had to be serviced. Liz Truss may not have won a general election, but she has been appointed through a democratic process of sorts, which had immense hurdles, to lead the country as its representative. Her policies were there to reflect the will of the people, however the push back was very robust. The bank of England raised interest rates with threats of further interest rate rises and warned of the risk of government borrowing rates rising. Is it reassuring that non-elected institutions can reset the government policy? Is this a safety mechanism to protect the population from the whims of an unwise government or an anti-democratic process which denies redistribution of wealth to a struggling populace? The question remains did she really ask for so much, regardless of how it would be distributed, that it would cause such a tsumani in the financial sector. The tax cuts were costed at 47 billion pounds. This sounds like a lot, of course it is a lot, but it is peanuts compared to the UK national debt which stands at 2.1 trillion pounds or 96% of the annual GDP, or the 200 billion pounds which have been pledged by the German government to help their populace through the impending energy crisis. To put these figures into context, this would be like someone earning £50,000 per year who has a mortgage worth £50,000 asking the bank for an additional £1000 on top of their mortgage. Is the financial system so fragile that it cannot accommodate this or is this the straw that could break the back of a camel eroded by years of poor fiscal management and global crises. If these tax cuts resulted in an economic growth of 2% then then tax revenue (with the cuts) would be unaltered, so a tax cut that stimulates growth could be tax revenue neutral, and if the revenue is neutral and the GDP has increased then the debt to annual GDP ratio, which is a measure of a countries credit worthiness reduces. Yet the result of such a proposal was a decline in the value of the pound with the bank of England threatening to increase interest rates ever higher, which would have decimated a nation where mortgage borrowing dwarves personal savings. Now through the media dissemination of fearful financial forecasts, the only aspirations that people may have for the following year are that their mortgage payments or energy bills may not rise too high, rather than any hopes for improvement in wages or living standards. If you ask most people, they will just say that the situation is a mess, which is obviously true, but the curiosity of the situation is that public opinion is against tax cuts, which may be unprecedented. I have never seen protests against tax cuts, only against tax rises. I know the debate is muddied by the abolition of the highest rate tax band and how much they benefited the population as a whole, but tax cuts in the face of generational stagnation seem like a good idea. An article in the Sunday times, written on the 20th of October, suggested she should have had the nous to realize that her pre- appointment mandate was nothing more than throwaway pre-election promises. Her crime was to have the temerity to make good on those promises! How dare she. Yet we want politicians with integrity. Boris Johnston for example suggested that the 40% tax threshold would be increased, off course that never transpired. Sure, she lacked the gravitas or guile to pull off such policies, the mandate from an election victory, or the courage or leadership to face down her adversaries. Margaret Thatcher or Trump would have told the bank of England and the economists that they were wrong. The kings of old led from the front of the battle. They knew that the populace would not allow them the luxury to sojourn to their palace when the enemy was at hand, alas she did not fight, and so she went, but I still believe in Liz’s vision, or ‘fairy tale’, according to Sunak. it’s a pity that she hadn’t bargained on a fight.

The Flemish Renaissance Movement and Its Key Artists What distinguishes Science from Non-Science Gut health- why it matters The NHS in crisis Clinical or statistical significance- why not both?